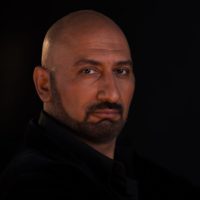 The New York Times hailed Ashraf Sewailam’s début at Lincoln Center’s Avery Fisher Hall as a “stand out performance” and Opera Newsdescribed his voice as “purring and velvety with an easily produced Ramfis-like top range with a majestic tone,” and his stage presence as “strong, mysterious and with mesmerizing intensity.”

Engagements in 2020 were to include both Carmen and Les Contes d’Hoffmann at the Metropolitan Opera as well as Don Magnifico in La Cenerentola with Minnesota Opera, and Ramfis in Aida with Virginia Opera. This summer he joined Opera Steamboat as Basilio in Il barbiere di Siviglia and Dr. P in The Man who Mistook his Wife for a Hat. This coming season he will make his mainstage Metropolitan Opera debut in The Magic Flute as well as join their production of Ariadne auf Naxos.  In addition, he will return to Seattle Opera as Colline in La bohéme, join Tulsa Opera for their production of Salome, and made take on the title role of Maometto II for Washington Concert Opera.

Other operatic engagements include the role of Osmin in Abduction from the Seraglio and Queequeg in Moby Dick with Opera San Jose, Bartolo in Le nozze di Figaro with San Diego Opera, Colline in La Boheme with Austin Opera, Basilio in Il barbiere di Siviglia with New Zealand Opera, the title role in Ali Baba with Opera Southwest, the role of Capitán in Florencia en el Amazonas with Madison Opera, Monterone in Rigoletto with Opera Grand Rapids, Toledo Opera, and Opera Carolina, Lignieres in Cyrano with Opera Carolina, Ramfis in Aida with Opera Rockies in Colorado Springs, sang on a recording of The 13th Child, a new opera by Danish composer Poul Ruders, Die Sprecher in Die Zauberflöte with Central City Opera, and the pivotal role of Ferrando in Il trovatore, critics exclaiming, “ When you add bass Ashraf Sewailam to the mix, this becomes even more special…And it needs someone of Sewailam’s caliber.”

In his début with New Zealand Opera as the assassin Sparafucile in Rigoletto, he was described as “hard to better, both vocally and dramatically.” He subsequently returned to sing Alidoro in La Cenerentola, which he later performed for Queensland Opera. Ashraf made his United States début in 2004 with Opera Colorado performing the role of Leporello in Don Giovanni.  Quickly becoming a house favorite, he subsequently performed there as Count Ceprano in Rigoletto, Bartolo in Le nozze di Figaro, Basilio in Il barbiere di Siviglia, and The King of Egypt in Aïda.

Other engagements include appearances with The Boston Symphony as Leoporello in Don Giovanni; Colline in La bohème, Pistola in Falstaff, Sarastro in Die Zauberflöte, and The Narrator in Peter and the Wolf ; returns to San Diego Opera for Ramfis in Aïda, Leporello in Don Giovanni, and Pizzetti’s Assassinio nella cattedrale; the Pirate King in The Pirates of Penzance with Lyric Opera of San Diego; and an exciting co-production between Opera Carolina, Virginia Opera, Toledo Opera, Opera Grand Rapids, and Lyric Opera Baltimore of Roméo et Juliette as Capulet. Additional roles include Balthazar in Amahl and the Night Visitors at Central City Opera; Angelotti in Toscawith Lyric Opera Baltimore; Pooh-Bah in The Mikado with Opera Memphis; Escamillo in Carmen and Queeqweg in Moby Dick with Fargo-Moorhead Opera; Secret Police Agent in The Consul with Chautauqua Opera; Sparafucile in Rigoletto with Fresno Grand Opera; Ferrando in Il trovatore with Chautauqua Opera and Virginia Opera; Colline in La bohème with The Chattanooga Symphony and Opera; Dulcamara in L’elisir d’amore with Baton Rouge Opera; and a rousing performance as Beethoven/Commendatore in Pulitzer Prize–winning composer Steven Stucky’s opera The Classical Style at Carnegie Hall, a role he originally created at Ojai Music Festival.

Ashraf’s concert appearances include Orso Faledro in La nave, Uin-Sci in Leoni’s L’oracolo, and Salomone in Montemezzi’s L’incantesimo at Avery Fisher Hall; his Carnegie Hall début as the Bass soloist in Rutter’s Mass of the Children; Mahler’s Symphony No. 8 with The Colorado Mahlerfest; and the bass solo in Beethoven’s Symphony No. 9 with the Phoenix Symphony. Additional concert engagements include Brahm’s Requiem with Dubuque Symphony, Beethoven’s Symphony No. 9 with Colorado Springs Philharmonic, Händel’s Messiah with Cheyenne Symphony, a concert entitled Eternal Spirit with Boulder Bach Festival, and a recital with pianist Kenneth Osowski at York College. He also appeared numerous times with The Colorado Symphony, Boulder Bach Festival, and the Colorado Music Festival. His concert repertoire includes Bach’s Saint John’s Passion, Magnificat, Christmas Oratorio, and Lutheran Masses in F and A; Händel’s Messiah; Haydn’s The Creation and Lord Nelson’s Mass; Mozart’s Requiem and Vespers; and the Verdi Requiem. Ashraf also has a commercial recording on the Bridge label in which he performs Songs from the Hebrew by Stefan Wolpe.

Ashraf began his career as a Cairo Opera Company house soloist, where he performed many roles including Dulcamara in L’elisir d’amore, Gaudenzio in Il signor Bruschino, Ramfis in Aïda, Palémon in Thaïs, and Sparafucile in Rigoletto. Ashraf was named a prize winner at the New Voices (Neue Stimmen) international competition in Gütersloh, Germany and was featured in the opening concert of the New Alexandria Library singing Beethoven’s Symphony No. 9 in Arabic. In addition to his singing engagements, Ashraf has taught at the American University in Cairo, and served as music director for Disney Character Voice International (DCVI) dubbing Disney productions into Arabic, and performed several of the characters. He earned a Doctor of Musical Arts degree in Vocal Performance and Pedagogy from the University of Colorado at Boulder.