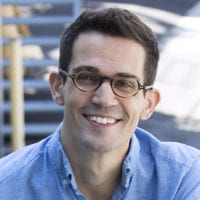 David is the co-creator, editor and producer of the Denver Philharmonic’s Emmy Award-winning webseries, Playing Out. He has designed projections for several large-scale musicals and concerts and created six curriculum-based, multimedia shows that he toured through middle and high schools. David is also the creator of The Big Adventures of Little Ioda, a six-part children’s series developed for PBS. The series won five Emmy Awards in 2016, two of which were awarded to David for Best Writer and Best Editor of a Children’s Program.